ESTIMATING MARKETPLACES SALES BY STATE: A CASE STUDY FROM OKLAHOMA

In Civic Economics' previous analyses of Amazon’s fiscal impact at the state level, Oklahoma has always stood out as one of the biggest losers of tax revenue because (a) the state is more sales-tax dependent than most and (b) there was no mechanism to collect any taxes on online sales in the state beyond consumer-reported use taxes.

Upon preparing the 2019 version, which is built from Amazon’s newest annual report for 2018, Oklahoma again stood out, achieving the rare worst-to-first in our state standings.  The policy that drove this dramatic change is known as a "marketplace facilitator" law, which places the burden on Amazon and similarly situated companies to collect and remit sales and use taxes on behalf of its third-party vendors.  Amazon began doing so on July 1, 2018.  Because no other marketplace operator has yet complied, we realized that Oklahoma's recent tax collection data might provide a clean case study for evaluating the impact of these laws.

So, Civic Economics set out to quantify the tax revenues that Oklahoma has gained through recent policy changes, which is provided as an addendum to Prime Numbers.  It provides a data-driven validation of Civic Economics’ proprietary methodology for estimating third-party Amazon Marketplace sales at the state level and thus the state and local tax revenue that might be be collected from those sales.  Click the image at right to download a stand-alone copy of the addendum.

Sales by State and Seller
2014-2018
Download the Full Report 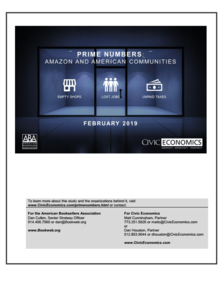 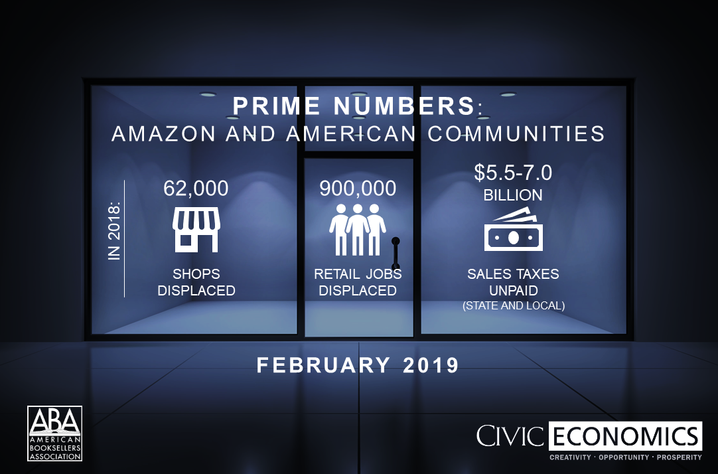 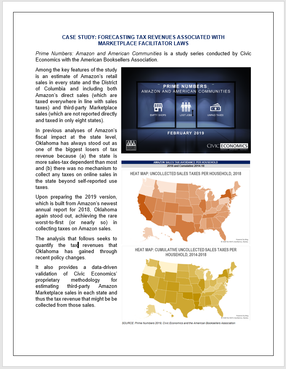 Read on below for highlights from Prime Numbers, or view the following: 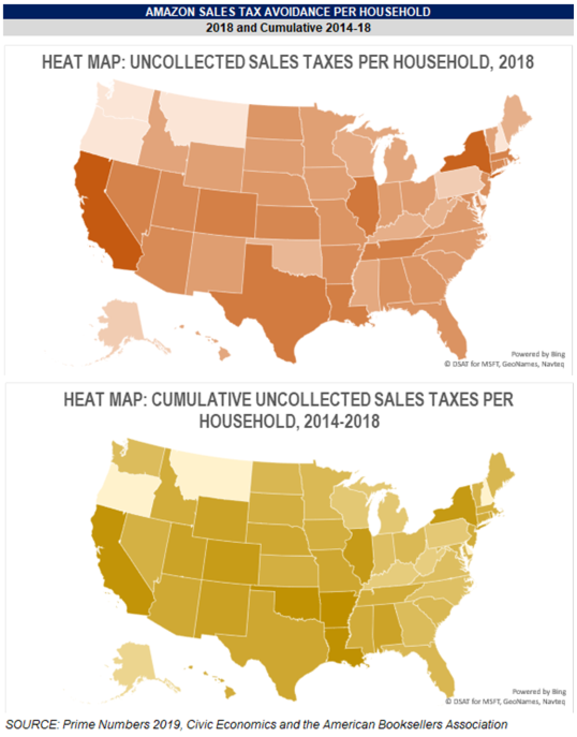 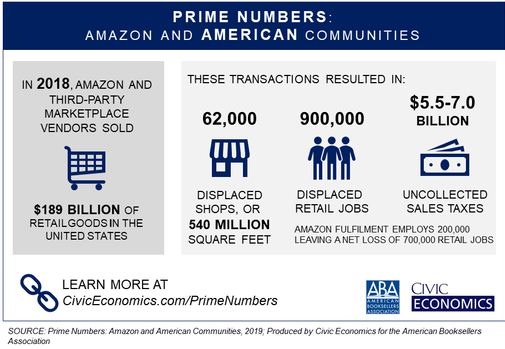 Amazon has made much of its commitment to collecting sales taxes on items it sells in every American state, but that commitment did not begin until 2017.  Moreover, that commitment does not cover third-party sales through the company's Marketplace, which accounts for well over half of Amazon retail sales.  As of February 2019, only eight states collect state and local taxes on those sales through so-called "marketplace facilitator" policies.  Uncollected sales tax is also highly variable among the states depending on state and local tax rates and agreements in place in any given year.  The following maps highlight the most impacted states (darker colors) in 2018 and cumulatively 2014-2018, the years for which sufficient data is available:

Civic Economics and the American Booksellers Association (ABA) are pleased to share Prime Numbers: Amazon and American Communities, a study of the economic impact of Amazon’s retail operations in the United States. In this report, we estimate Amazon’s retail sales in the United States, both those sales made by Amazon and those by third-parties, quantify the retail space and employment displaced by those sales, and estimate collected and uncollected sales taxes for both Amazon and third-party sellers.

The previous iteration ofPrime Numbers covered Amazon business through calendar year 2016.  This year, we include both 2017 and 2018, the data for which only became available with the release of Amazon's 10-K in early February 2019.

Prime Numbers provides citizens, consumers, and public officials the tool to understand the monumental changes occurring in American retail, as exemplified by Amazon.  Online shopping is rapidly shifting and shrinking the economic activity associate with retail, from commercial districts and shopping centers to industrial parks at the edge of town.

In addition, Amazon continues to avoid a substantial and widely underestimated share of state and local sales taxes in all but eight states.  Prime Numbers provides officials in the remaining states with a starting place as they seek to understand and recoup those losses through new sales and use tax regulations.

Read about the study in Bookselling this Week.