If your business or community is facing a challenge for which economic impact analysis may be helpful, civic economics will bring hard numbers and hard won credibility to the debate.

Economic impact analysis is a particularly useful tool when communities are exploring how to address a given challenge, respond to a development proposal, or formulate policy for the years ahead.

Civic Economics has provided economic impact analyses of a myriad of issues, from the most conventional to the most unusual.

Example: A town faced a policy question: whether to continue providing incentives to a distribution center for a major national retailer currently operating within the city. Civic Economics quantified the totality of the operation, from labor and suppliers to taxes and public costs to provide specific and credible findings to local policymakers.

Example: A dynamic border city considered a request for substantial incentives to the developer of a shopping center on an abandoned brownfield. Civic Economics was retained by a group of shopping center operators who feared subsidize competition in the same submarket. We were able to demonstrate that the proposed center would add little to the citywide retail market, resulting in a simple shuffling of tenants among locations.

Example: Many American communities, particularly those with a distinctive identity, struggle with the question of permitting large-format retail in a given location. Civic Economics has developed an approach to analyzing these proposals that includes strong local input to go along with the hard numbers. In communities from Houston, Texas to Homer, Alaska, our work on the impact of big box retail has given policymakers the basis for a rational decision.

But what if the community wanted to consider a broader policy change? The real strength of Civic Economics is in identifying the variables to be analyzed, then acquiring and organizing the data needed to do so.

Example: A fast growing city considered including in a bond issue substantial funds for the development and conservation of affordable housing. Civic Economics traced the uses to which a previous funding package had been put, through more than 30 individual projects around the city, and quantified the economic impact of the funding. Our work provided clarity and contributed to the passage of the bonds.

Example: A California beachside community considered implementing a local minimum wage substantially in excess of the state minimum, currently the highest in the nation. Civic Economics conducted a detailed survey of current retail, restaurant, and entertainment employers to identify impacted workers. We quantified the impact the policy would have on employers, employees, and on independent businesses city wide. Our work provided the voters of that community with meaningful, data-driven analysis of what had previously been a contentious debate.

the civic economics of ... economic impact

Economic analysis is at the heart of all that we do at Civic Economics. From neighborhood commercial studies to citywide comprehensive planning, we start with data.

Our reputation for the innovative application of industry standard analytical tools is hard earned, as we've applied these tools to a wide range of challenges. 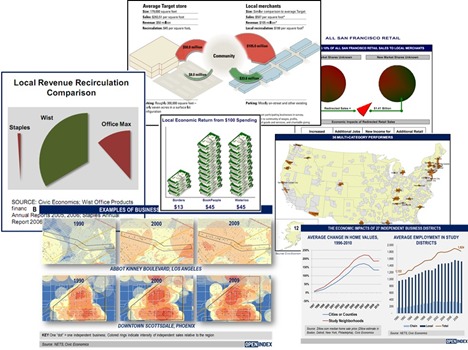