Residential neighborhoods served by successful independent business districts gained, on average, 50% more in home values than their citywide markets over the most recent 14 year period. 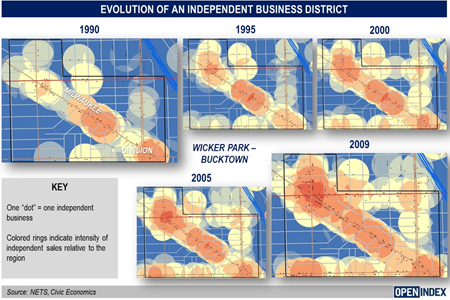 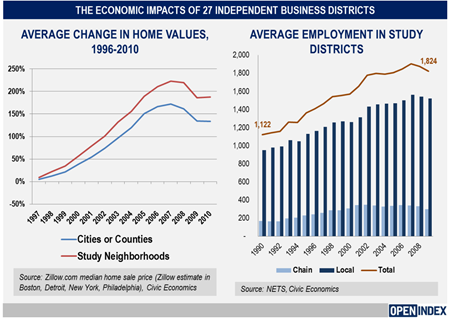 Finally, we drilled down to the neighborhood level, identifying in each city one or more business districts dominated by independent businesses. We prepared time-series maps of the evolution of each district, facilitating an understanding of how each came into its current form.  Finally, we analyzed changes in home values (a strong proxy for desirability) for adjacent neighborhoods against the broader citywide real estate market. 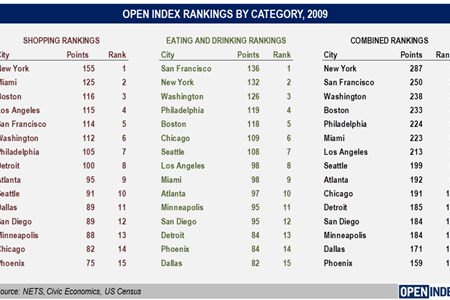 A combined index produces the following rankings based on 2009 market share:

Next, we focused on the same trends in the 15 study communities, mapping trends for retailers, restaurants, and drinking establishments for each. With this data, we were able to develop a scoring system to map the changes in each relative to one another and rank performance over time. 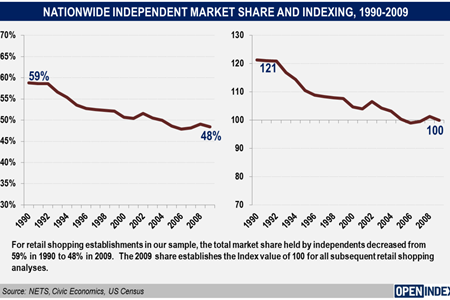 Among retail shopping establishments at the national level, the market share captured by independents declined from 59% in 1990 to 48% in 2009.

For eating and drinking establishments, independent market share declined from 71% to 64% over the same period.

In 2010, OPEN, the small business services division of American Express organized Small Business Saturday, dedicating the Saturday of Thanksgiving weekend to supporting independent, locally-owned retailers and restaurants. With a broad marketing campaign, credits for cardholders, and promotional events, SBS exceeded all expectations.  Merchants that accept American Express experienced a marked increase in revenue over the same day in 2009. While Civic Economics was not directly involved in the event, our prior research provided the underpinning for much of the campaign.

For 2011, OPEN approached Civic Economics to develop an original research project that would provide an understanding of the conditions facing independent businesses and the impact they have on their communities. The study design built on the previous Indie City Index, prepared for the American Booksellers Association, by adopting a more comprehensive dataset and focusing on selected American cities: Atlanta, Boston, Chicago, Dallas, Detroit, Los Angeles, Miami, Minneapolis, New York, Philadelphia, Phoenix, San Diego, San Francisco, Seattle, and Washington.

The underlying data was a focused subset of the National Establishment Time Series (NETS) database maintained by Walls and Associates of Oakland, California. NETS provided 20 years of data covering every retailer, restaurant, and bar that operated in a stratified national sample of 144 counties, including the core urban county of each of the major cities to be studied. For those nearly 2 million businesses, Civic Economics classified each as being local or non-local based on consistent criteria.  This allowed us to identify national trends in market share for independent business in several sectors.% over the same period. 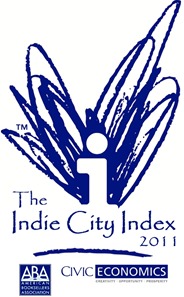 In January of 2011, the American Booksellers Association released the Indie City Index, a national study in which Civic Economics measured the market shares captured by independent retailers in every metropolitan area in America. That study produced metro area rankings for independent retail strength nationally and by size and region. The Index was limited, though, methodology we designed to meet the budget and time constraints.

City rankings, of course, are popular with local news teams everywhere, and the Indie City Index earned the booksellers positive media coverage across the nation.  In fact, the Indie City Index provided the basis for the Washington Post's rankings of "Best Cities for Entrepreneurs" later that year. In that way, it served its purpose well. 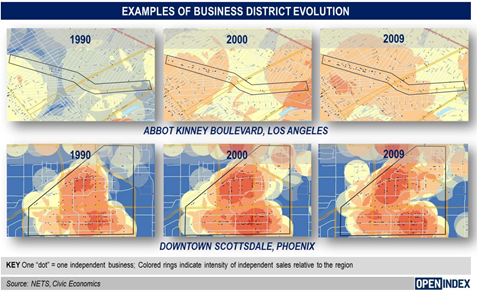 Over the years, we've bitten off some mighty big bites of data, but the OPEN Index required a month long data combing marathon before we could even think of findings or reporting.

Read on to learn about the fruits of that labor and to download study reports.